Public ‘career feminists’ have been more concerned with getting more women into ‘boardrooms’, when the problem is that there are altogether too many boardrooms and none of them are on fire.

I have a feeling I am really going to enjoy this book.

Did you know jumping on trampolines is hard work? When I was a kid, I thought it was the easiest thing in the world. I barely survived this morning.

This is something I’m going to call a “moon pit.” I have no idea how deep that pit of foam blocks is, because I never reached bottom. Dashiell could jump in and scamper out because he weighs 35 pounds. I weigh enough that it’s kind of embarrassing and is better represented in binary: 11010010. I would estimate it took me 1 minute per foot of area I had to cover in that pit of doom. The time I jumped as far as I could in was really fun while I was in the air and then 5 minutes of bootcamp-level exertion.

My dad owns and operates a turfgrass farm. When I was a young kid, I would go on deliveries with him. He’d drive an eighteen-wheeler loaded with grass, usually to Columbus, GA. There was a time he listened to a lot of Tony Robbins audiotapes. That guy has an amazing rhythmic voice that I can still hear in the back of my head.

We would take a loaf of white bread and put it on the dashboard to warm in the sun. We’d arrive at the delivery location and I’d ride on the Spyder forklift with him while he placed the pallets. Afterward, we’d take the warm bread out and make sandwiches with it.

The other day, Dashiell and I were headed to Little River Regional Park to learn about birds together. Even though it’s December, it was over 60 degrees out, so we had the windows rolled down. I was playing Public Enemy’s “Welcome to the Terrordome” and he was shouting “louder! louder!” in the backseat while we drove through the NC countryside.

Today, I watched my son Thorin get born. His momma worked very hard and he slipped out into the world. We spent 36 long hours getting him there and I am so tired I am going to fall into a coma, but it was the most beautiful thing I’ve ever seen. 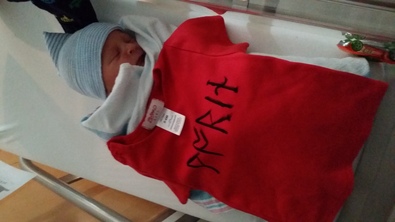 This year, I’m thankful for: